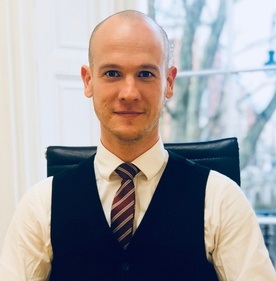 Callum is a solicitor who joined the firm in May 2015. He is a criminal law enthusiast and was delighted to join a firm with such an established reputation in this area of the law.

Prior to joining he gained an honours degree in Business Law from Glasgow Caledonian University before completing the accelerated Law degree and diploma at the University of Strathclyde. He then undertook his traineeship at personal injury practice Bonnar Accident Law, under experienced partners Ronnie Conway and Veronica McManus, where he was encouraged to develop his passion for justice and representation of the underdog. This area of the law demands that cases are meticulously prepared to the highest standard and Callum has brought this approach with him to the criminal law.

Having completed his traineeship he then spent approximately 8 months in a multi discipline practice where he gained valuable exposure to the criminal courts. Despite not having previous criminal court experience he quickly demonstrated his competence and was trusted to undertake a variety of work representing accused persons at Summary and Solemn level. In particular he successfully defended a basketball coach in a 3 day trial against allegations of sexual offences. This experience combined with his initial training provided the platform for his move to Beltrami & Co.

As well as a passion for the criminal law he has a keen interest in advocacy that he has been developing since his years at the University of Strathclyde. It was during that time that he reached the mooting final in his role as Senior Counsel and appeared before Lord Kinclaven in Glasgow High Court. In addition Callum won the Glasgow Bar Association Plea in Mitigation competition during his diploma year. Most notably his best achievement during his early years was to win a client of the University of Strathclyde Law Clinic an award of almost £70,000 from the Glasgow Employment Tribunal. That was following a three day hearing in an action for unfair dismissal where he presented his client's case against a fully qualified solicitor. Callum had not even graduated with his law degree at that stage and the award remains a record for a Law Clinic client to this day.

Since joining the firm his interest in advocacy and fearless approach have seen him appearing on behalf of clients in criminal cases in Sheriff Courts across Scotland. He undertakes a variety of cases in front of both Sheriff and Jury trials including assault and serious assault, breach of the peace, public disorder, offensive behaviour at football, road traffic offences, misuse of drugs, offensive weapons, fraud, theft, proceeds of crime and sexual offences.

He regularly instructs Counsel in a variety of criminal matters within Scotland's High Courts and Court of Appeal.

In addition he maintains an interest in both employment and personal injury law, and continues to conduct cases in these areas.

In December 2015 Callum successfully defended a client against a charge of causing death by careless driving in a Sheriff & Jury trial. The client had previously been advised by Senior Counsel that her prospects of success were extremely poor. The client firmly maintained her innocence and Callum’s fearless approach saw the matter proceed to trial. After a week long trial the jury returned a verdict of not proven and the client was free to leave the dock. More detail on this case can be read here.

"Callum, I am absolutely delighted at your performance and your grasp of the key facts which led to acquittal. I would like to thank you for your professionalism , diligence and excellent defence and would have no hesitation recommending you and Beltrami for any defence requirements. Thanks again."