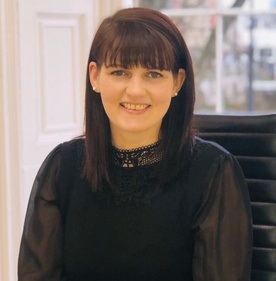 LL.B (Honours) Dip.LP NP VR
Tel: 0141 429 2262
Email: This email address is being protected from spambots. You need JavaScript enabled to view it.

Stephanie studied for her Bachelor of Laws with Honours degree  at the University of Stirling before undertaking  the Diploma in Professional Legal Practice at the University of Glasgow. Stephanie successfully completed her traineeship at a small firm in Dumfries in February 2018 where she predominantly practiced in Criminal Law and Family Law.  She joined Beltrami & Company in January 2020.

Stephanie has gained a diverse wealth of experience in her career to date. Early on in her traineeship, she instructed Counsel for a case involving an alleged rape between a husband and wife in the 1980’s, before the law of rape between spouses was recognised. Stephanie’s highest profile case involved assisting with the defence of a client named “one of Scotland’s most dangerous paedophiles”. Stephanie assisted both Senior and Junior Counsel to reduce the 55 charge Indictment to 17 charges for offences committed between 1991 and 2015.

Stephanie appears in both the Sheriff Court and the Justice of the Peace Court. She has also assisted Counsel in the High Court.  She has experience appearing in Courts in Dumfries, Glasgow, Kilmarnock, Hamilton and Paisley for various matters such as Rape, Domestic Assault, Assault, Possession of drugs, Intent to Supply Drugs, Sexual Offences, Threatening and Abusive Behaviour, Theft, Breach of the Peace, Road Traffic Offences etc.  Prior to joining Beltrami & Company, Stephanie also appeared for clients in Children’s Panel proceedings, Referrals to the Sheriff and for various civil matters including divorce, contact and residence of children. Stephanie also represents clients at Police stations and prison.

Uniquely, Stephanie has served with the British Army for the last 12 years. During her service, she has trained all over the world. Stephanie has undertaken additional training in order to progress her military career with the intention to attend the Royal Military Academy of Sandhurst later in the year. She currently serves with the Royal Military Police. Stephanie graduated from the Policing College at the top of her class, scoring 100% in her oral exam before several high ranking officers. As a result of her time with her Unit, Stephanie has gained valuable insight into police procedures, both military and civilian. She is qualified in Military Searching and has worked with the Military Working Dogs both at home and abroad. This added understanding of policing assists Stephanie when preparing her client’s cases.

Stephanie is meticulous in her work and pays close attention to the little details. Her experiences gained during her military service and her continually developing legal knowledge allow Stephanie to provide professional legal advice in a straightforward manner.