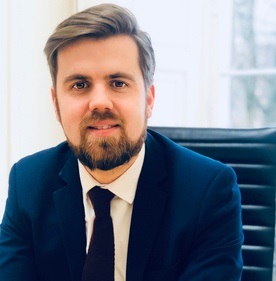 Telephone: 0141 429 2262
Email: This email address is being protected from spambots. You need JavaScript enabled to view it.

Craig conducts criminal court work at both Summary and Solemn level in courts throughout Scotland.

He regularly instructs both senior and junior counsel in relation to a variety of matters prosecuted in both the High Court of Justiciary and Sheriff Court. He has experience in instructing and leading expert witnesses in the presentation of his client’s defence. He has a particular interest in Road Traffic Law and has experience of travelling to various courts dealing with cases ranging from speeding offences to road traffic matters of a more serious nature including drink driving offences and causing serious injury by dangerous driving.

Craig is regularly involved in the defence of cases prosecuted at Sheriff and Jury level. His meticulous approach and attention to detail instils confidence in his clients in the preparation and conduct of their cases. He is known for being able to build a good rapport with client’s and often achieves in exceptional results in the most challenging cases.

Craig was involved in one of the first cases whereby the Crown lodged an appeal in a case (in terms of s.107A of the Criminal Procedure (Scotland) Act 1995), where the trial judge upheld a “no case to answer” submission made by the defence. In that case, the instruction of a defence expert witness in cell-site data analysis was vital in securing the client’s ultimate acquittal. Although the appeal court granted an appeal by the Crown and ruled that there was a sufficiency of evidence, the client was found unanimously not guilty by the jury after a trial lasting in excess of 8 weeks. View the case here.

Outside of work, he is a keen piper. He has previously been involved in pipe bands which has seen him travel the world playing at various events and engagements. In addition to piping, he enjoys playing golf and football when he can find any spare time.

“I cannot thank this Firm or Craig Broadley enough for the help and support they have provided. We changed to this law firm after another had misguided and didn't listen to our claim after a brief. From our first appointment we knew we were being listened to and understood. Craig carried out a brilliant case on our behalf and now my son has a good future ahead of him again. I could not fault you or the company and if ever required for any reason, I know who I will be referring and calling upon. Thank you so much.”

“I was designated Craig Broadley for my case. Due to geographical reason with me living In Birmingham this wasn’t a straightforward case. From the minute I spoke to Craig I was felt at ease and could see he was passionate and professional about his work. After many adjournments and complications, Craig today got me the result me and my family wanted. Can’t thank Craig enough, hopefully il never require him again but wouldn’t think twice if needed. A true gent and a credit to Beltrami, Thank you Craig”

“I approached Beltrami & Co with only 3 weeks until trial, I met Craig Broadley 3 days later on the monday. He took on my case with only 18 days till trial. Craig was confident and informative and kept me up to date every step of the way until trial. During the 3 day trial Craig represented me with the utmost professionalism you could expect from a company like Beltrami & Co. I will be keeping Craigs number just incase i ever need his expertise in the future.”

“I recently instructed Beltrami & Co in an unusual and complex case. I can’t speak highly enough of Craig Broadley, who inspired confidence from the moment I met him at our first meeting. He explained the legal and Court proceedings in detail, and his research was thorough and detailed. He communicated at all stages of the proceedings and I felt confident and reassured at all times, that he was on top of matters. Craig was diligent and hard working, liaising with Senior Counsel when necessary and I’m delighted to say that a positive outcome was achieved. I’d like to thank Beltrami & Co and in particular, Craig Broadley, for delivering an outstanding, professional, results driven service”

“I cannot recommend Beltrami and co lawyer company any more, in particular mr craig broadley he puts in amazing amounts of effort to win the case and is always there to help when you need him, 3 cases won I cannot thank him enough”