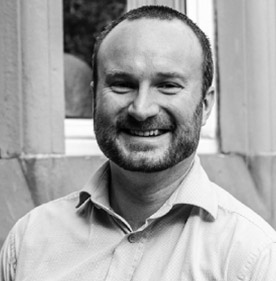 Simon joined the firm as a trainee after graduating top of his class at Glasgow University. Since qualifying in 2004 he has conducted trials covering all areas of criminal law - from breach of the peace, road traffic, assault and domestic abuse to offensive weapons, robbery, drugs and fraud - and has appeared in over 50 Sheriff and District courts in Scotland. He additionally has experience at Parole Board hearings, Mental Health Tribunals and Childrens Hearing Referrals as well as Courts Martial in England.

In 2010 Simon became the second youngest Solicitor Advocate in the criminal courts in Scotland, winning his first two High Court cases the same year. Since then he has conducted a number of High Court trials with particular successes in serious sexual offences. He has also assisted senior counsel in cases including murder, historical abuse and complex financial crime, whilst also continuing to practice in the Sheriff Courts at both summary and solemn level. In 2013 Simon was the youngest of three finalists for Criminal Lawyer of the Year in the Scottish Law Awards.

As a solicitor advocate Simon has also appeared in the Court of Appeal, including successes in the reported cases of Neill v HMA [2014] (death by dangerous driving) and McGartland v HMA [2015] (importation of controlled drugs into prison).

From 2014 Simon was closely involved in the so-called Rangers 'Fraudco' case as the solicitor for former Administrator Paul Clark. After personally conducting detailed and wide-ranging investigations, Simon relentlessly harried the police and the Crown in what became a high profile disaster for the prosecution. When the matter reached indictment in the High Court, Simon drafted preliminary pleas which precipitated the dramatic early dismissal and withdrawal of all charges against his client. Simon was then instructed in the ensuing action against the authorities in the Court of Session for wrongful arrest and wrongful prosecution. In a landmark appeal to the Inner House of the Court of Session (Whitehouse & Clark v Chief Constable & Lord Advocate [2019]), the long-held immunity of the Lord Advocate was overturned in 2019. In 2020, following the recovery of internal Crown Office documents, the Lord Advocate was forced to dramatically admit that the prosecution of Mr Clark had been malicious and without probable cause, before settling with Mr Clark for an eight figure sum.

Simon has also recently worked on other high profile cases including an investigation raised by the Iraq Historic Allegations Team, and 'test case' prosecutions involving psychoactive substances (formerly known as "legal highs"). He was also heavily involved in the Public Inquiry into the Edinburgh Tram Project, leading our inhouse team representing seven of the Inquiry's Core Participants in a crucible of official, public and media scrutiny. More recently Simon has been instructed as junior counsel in the Renee Macrae murder trial, the longest running missing persons inquiry in UK legal history.

"Mr Simon Whyte was appointed as my solicitor advocate. Listening from the dock as he spoke I remember thinking, ‘I’m pleased he’s on my side'."

"I met Simon at the lowest moment of my professional career. He was able to provide clarity to an extremely complex set of circumstances. His advice was incisive and his attention to detail was extraordinary. His calm demeanour meant that I was able to concentrate on the issues that really mattered. I am happy to recommend his services to anyone in difficulty."

"I couldn't have coped without the encouragement and wise counsel of Simon Whyte. Nothing was too much bother for him and he showed personal attention in an age of increasingly impersonal technology. His responses were timely and very well argued. In short, first class!"